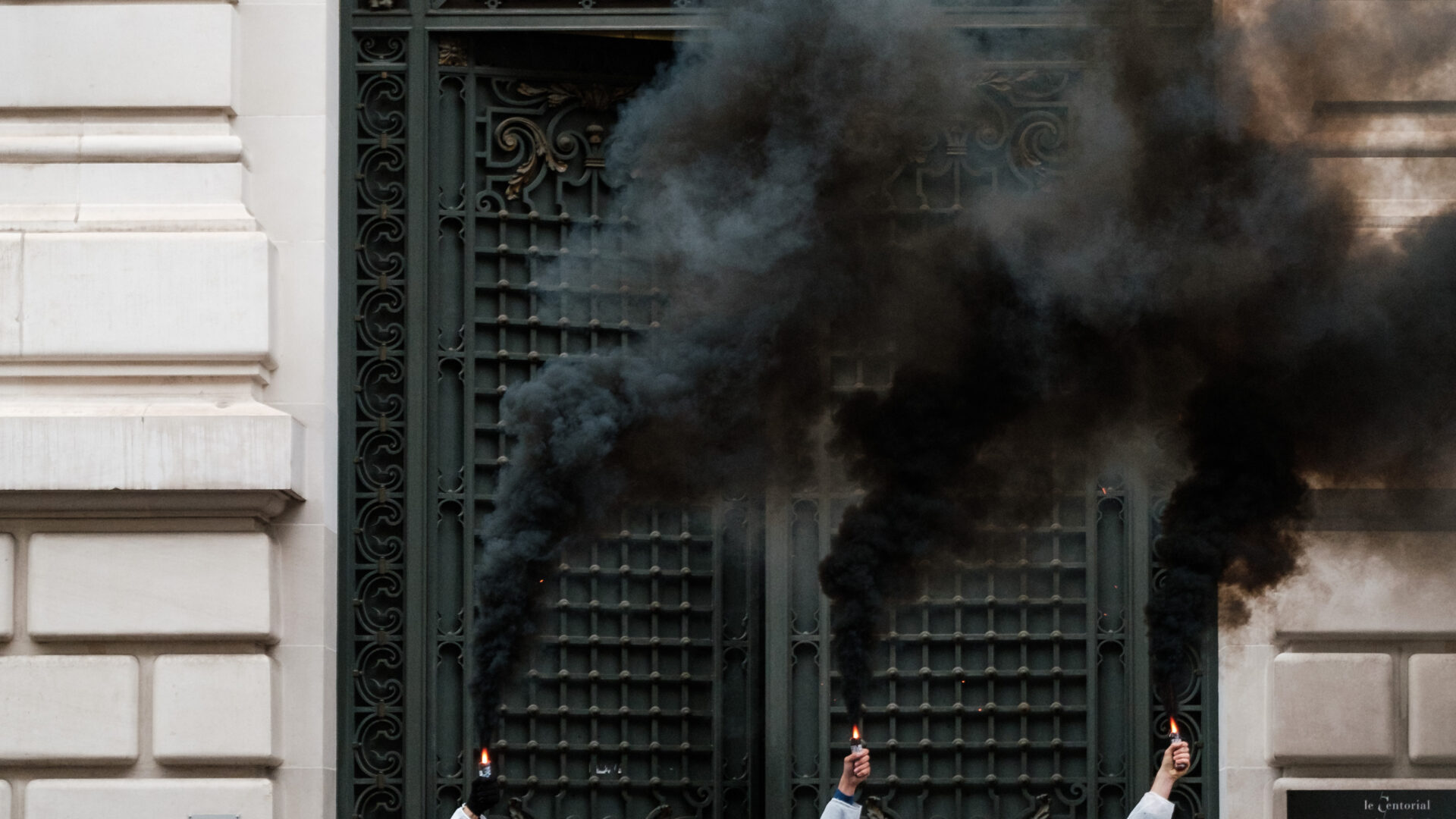 EU Commission and BlackRock: Off to a bad start on banking and climate change

The interim BlackRock report could seriously derail the attempt to reform banking in Europe to meet the challenge of climate change and other ESG risks. New progressive and ambitious initiatives are needed to put us back on track.

Following a request from an advisory body, the High-Level Expert Group on sustainable finance, the European Commission has set out to explore what approach can be used to have banks contribute to a target of diverting investments from the harmful to the sustainable. This is set to be part of the upcoming Renewed Strategy on Sustainable Finance since until now the EU’s sustainable finance laws have focused on the investment industry. As a first step, the Commission has hired the world’s largest asset management fund BlackRock to write a report on ‘best practices’ to help guide the Commission, following a public tender.

The choice of BlackRock was denounced by about 80 MEPs as well as civil society organisations. It led straight to a complaint to the European Ombudsman over the conflicts of interest implied in letting a financial corporation with heavy investments in fossil fuels and with a major stake in European banks suggest how to tackle an issue in which it has a financial interest. Following a damning verdict of the European Ombudsman, that deemed BlackRock to have a strong financial interest in the dossier, the Commission decided to release the interim report in December, even though they had previously refused to do so.

While the interim report does not include their final recommendations, it does give indications about where this is heading. BlackRock’s own priorities risks setting the attempt to make European banking greener on a disappointing and unambitious track from the beginning, and hence fail to protect the planet.

The Commission sets the bar low

In the specifications, the Commission gives BlackRock the following instructions:

For each of the three objectives the study should A) provide a comprehensive overview of the state-of-play at EU level and, where relevant, at global level; and B) identify best practices/principles as regards the arrangements, processes, tools, and strategies to achieve them.”

While this appears clear enough, it is not clear what the purpose of future EU initiatives on banking should be. Is it merely to protect banks from risks, e.g. so-called stranded assets? Or is it the intention to ensure that banks do not cause significant harm through their investments and lending policies? Is it to align bans with a Paris agreement scenario – implying, among other things, a rapid divestment from fossil fuels? The lack of clarity means initiatives could merely be about protecting banks from risk, rather than protecting us all from reckless banks.

The lack of clear ambition risks leading to low ambitions, particularly when the first step is taken by teaming up with BlackRock. 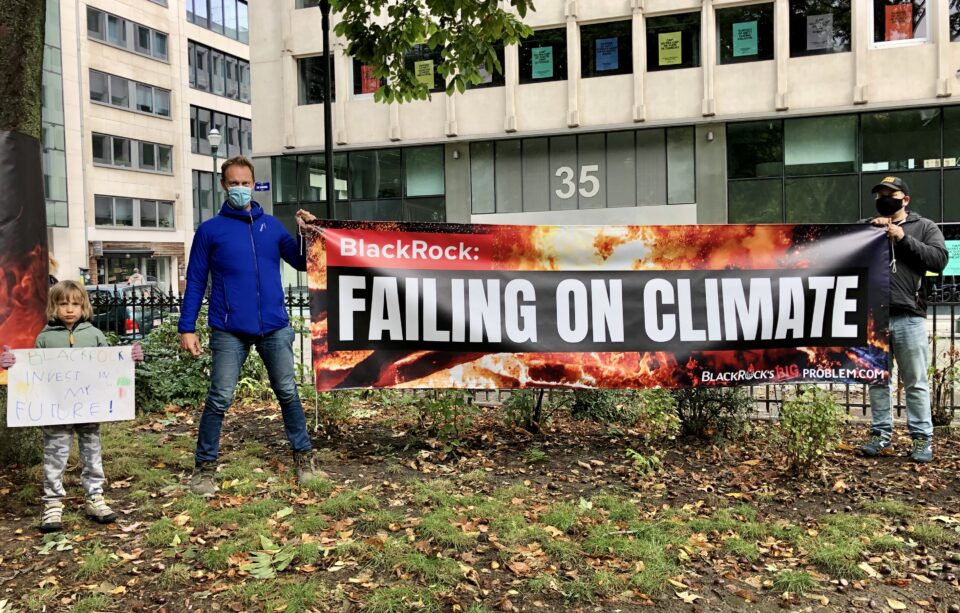 It depends on who you ask

The report is supposed to feed into policy-making by collecting and analyzing views and practices among banks, supervisors, academics and civil society organisations. From interviews and analysis, the end goal is to identify ‘best practices’, and for that it clearly matters who is asked.

The selection of banks consulted reveals a staggering fact: the innovative, progressive banks that have worked systematically for years to develop sustainable banking are not represented (such as those in the Global Alliance for Banking on Values). And of the ten top performers on sustainability in Influence Map’s scoreboard of banks, only three appear on the list of banks consulted by BlackRock (InfluenceMap, Sustainable Finance Policy Engagement, September 2020). This cuts out potentially valuable experiences from the report and narrows the available information to identify the way forward (‘best practices’).

Furthermore, only a narrow selection of NGO’s are consulted, and the number of papers consulted is small and symbolic. In the case of Change Finance we see that two documents from our website are taken as representative of our views, though they are out of context. The fact is that, although we are presented as participants, we were not involved in the least. That too is the case with at least two other NGOs. That begs the question if other groups were treated in a similar fashion, i.e. if the involvement of civil society organisations was even lower than it appears to be.

The report itself does provide a plethora of interesting observations as well as telling data on the state of play. It matters, for instance, that a majority of central bankers see a need for a taxonomy on significantly harmful investments to complement the sustainable taxonomy that is underway in the EU. But a large number of key questions are left unanswered, while others are treated superficially (see below).

One cross-cutting problem is that the ‘environmental, social and governance risks’ that are supposed to be the heart of the matter, are not defined in any meaningful manner. The report merely lists ‘focus areas’ (p. 10). In fact, the report says so little about ‘social and governance risks’, that it begs the question if it makes any sense to pretend they are included. For instance, while ‘aggressive tax optimisation’ and tax avoidance are standard components to many financial institutions and are to be covered by governance issues (“G”), there is only a single mention of it in the report – in a table. To draw any conclusions from the draft report about ‘best practices’ on ‘social risk’ or ‘governance risk’ will do more harm than good.

At one point, the report seems to suggest that a fixed definition would be counterproductive: “Stakeholders highlight a need for a flexible definition to allow for expansion of themes in scope, for instance, based on input provided by civil society organisations signaling the relative urgency of the topics, as well as geographical and cultural differences to be taken into account (p. 81).” While the identity of these ‘stakeholders’ is not revealed, we would highlight that civil society organisations have argued that clear, common definitions are indeed needed. Such definitions are necessary to facilitate accountability for financial institutions, and provide the basis for regulatory measures. That is what the EU Taxonomy is supposed to do. 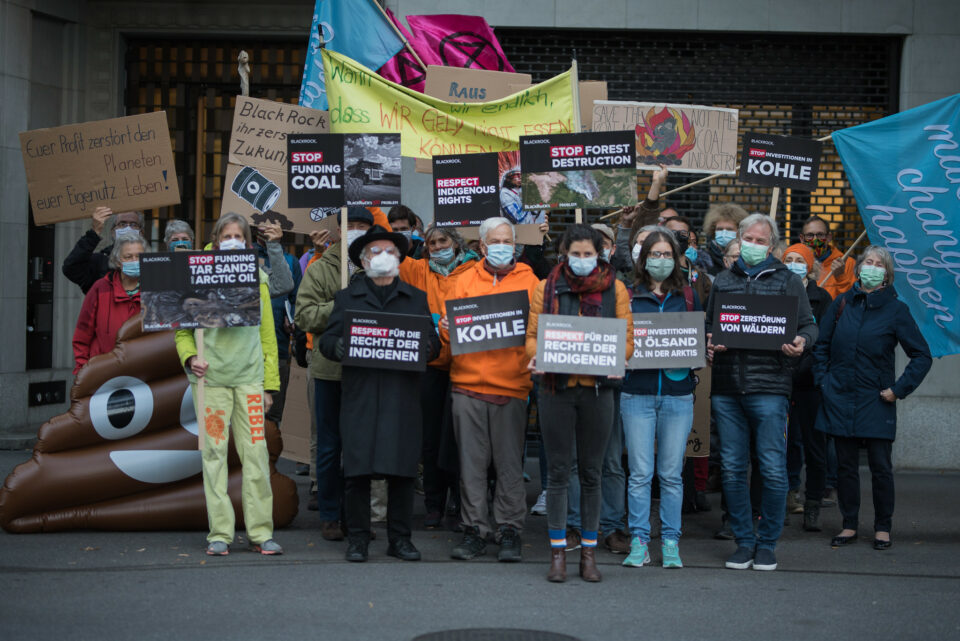 The above can partly explain problematic and questionable parts of the report. The investigations into all three areas suffer from bias in that some questions are left out due to the reduced pool of stakeholders interviewed while other questions are handled with utmost care because they are what banks want. Finally, proposals tabled by civil society organisations are treated superficially.

When Change Finance initiated a complaint procedure on the awarding of the contract to BlackRock, it was motivated by the fear that what should be the first steps towards important reforms of banking would end up as a mere call for voluntary measures, self-regulation and soft law that would have few tangible results and to redirect bank lending and investment to underpin a just transition. It would fail to aver climate catastrophe. When looking at the report from BlackRock, those fears have not been allayed – quite the contrary. The above suggests a biased approach, and it is not clear at all how ‘best practices’ can be derived from this interim report, not to mention how they will lead to the desperately needed changes in banking practices to underpin a swift and just transition.

The terms of reference, as well as the way they have been carried out, must be challenged. In the coming months, other initiatives must be taken to identify what measures will help us make banks align to a path that would help avert a climate catastrophe.

BlackRock interim study: Development of tools and mechanisms for the integration of environmental, social and governance (ESG) factors into the EU banking prudential framework and into banks’ business strategies and investment policies

Change Finance and Corporate Europe Observatory: The BlackRock Model – How the EU is choosing the wrong path to stop banks destroying the planet

Change Finance: A short info sheet on our BlackRock-EU Campaign