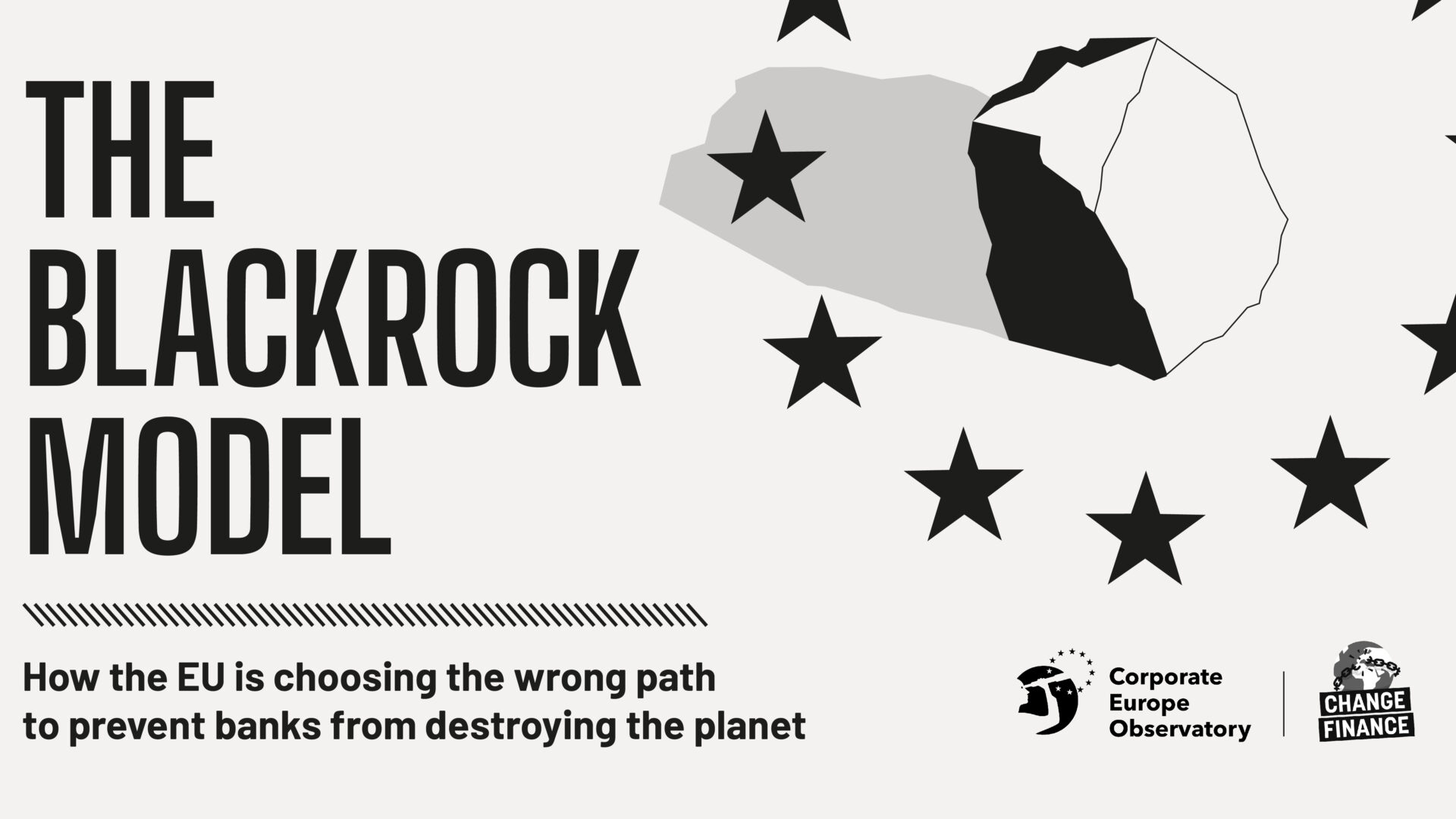 Brussels, 25 November 2020 – The European Commission did not properly consider conflicts of interest when it granted a contract to BlackRock – a big investor in fossil fuels – to advise on the EU’s new sustainable finance agenda for banks, according to an opinion by the European Ombudswoman published today (1). The complainant, the Change Finance Coalition, believes the Commission should now drop the contract and start afresh.

The Change Finance Coalition welcomes this opinion, after a complaint filed by Change Finance and two members of the European Parliament, and believes the Commission should drop the contract and start afresh. New research (2) also published today shows how the Commission disregarded all warning signs when awarding the contract to BlackRock, the world’s largest asset manager with $7.8 trillion in assets.

Today’s news that the European Ombudswoman denounces the Commission for disregarding conflicts of interest in the BlackRock mandate comes as a great relief to the Change Finance Coalition. In the decision, the Commission is urged to improve on its rules, as well as on the rules regarding public spending of all EU institutions, as the current rules do not contain proper safeguards against conflicts of interest when procuring work from the private sector.

The European Union will be entering uncharted waters with the integration of rules on climate-related investments into banking regulation, and preparations are key. The problem is that BlackRock will be the only major player whispering advice into the Commission’s ear on how to regulate banks on climate before it tables proposals on these banking regulations.

BlackRock’s advice is far from impartial. New research by Corporate Europe Observatory (CEO) and Change Finance today reveals evidence that BlackRock is a key player in coordinated lobbying against the EU setting stringent, sustainable standards for investments. It is also a huge investor in fossil fuels, despite green claims by CEO Larry Fink at the start of 2020. On top of this, the research shows BlackRock is the biggest or second biggest shareholder in 12 of the top-15 European banks most heavily invested in fossil fuels.

The European Commission neglected these essential elements when it denied any wrongdoing in an answer to a complaint by civil society before the summer. The Ombudswoman now vindicates civil society.

Hundreds of activists took part in actions at BlackRock offices in 16 cities across the world in September, calling out the world’s largest asset manager for its climate hypocrisy. (Photos found here)

“Looking at this case, it is hard to come by more glaring conflicts of interest in one go. By choosing BlackRock, the Commission basically handed Big Finance the steering wheel for the implementation phase of its action plan on sustainable finance. If the contract with BlackRock is not withdrawn, that means the final nail in the coffin of a true Green Deal that is aligned with the climate ambitions of the Paris Agreement. Asking BlackRock to suggest the best rules for sustainable finance is like asking a nuclear power company for advice on a nuclear phase-out. It is a relief to hear the Ombudswoman sides with us. Hopefully this will soon have consequences for the way the Commission handles this crucial policy in the making. This outcome is also a call to members of the European Parliament to help get the EU on the right track for sustainable finance.”

“We are happy the Ombudswoman has decided in our favour. The Commission did not evaluate conflict of interests correctly when awarding the contract to BlackRock. For us, a logical consequence should be for the Commission to cancel the contract with BlackRock. We further expect the Commission to act on Ms O’Reilly’s decision and strengthen its rules on conflicts of interest as well as its enforcement to make sure a case like this doesn’t happen again. To stop the climate catastrophe, finance needs to divest from fossil fuels. Strong sustainability objectives in banking rules, and a taxonomy on environmentally harmful investments, are crucial steps towards this goal. BlackRock, managing billions of dollars invested in fossil fuels, is highly biased in its advice on sustainable finance. The asset manager is a huge lobbying force, not an independent adviser.”

The report – The BlackRock Model. How the EU is choosing the wrong path to prevent banks from destroying the planet – can be found here: https://bit.ly/2JVhk9Z

Change Finance is a civil society network that advocates reforms of the financial sector to make it better serve societies, people and the planet. It has been strongly involved in advocating to defend the independence of EU financial regulators from the influence of the financial industry.

In April 2020 Change Finance, with the support of 91 civil society organisations, sent an open letter to the European Commission, requesting the cancellation of the contract awarded to BlackRock. Here’s a timeline of actions against the BlackRock EU deal this year.