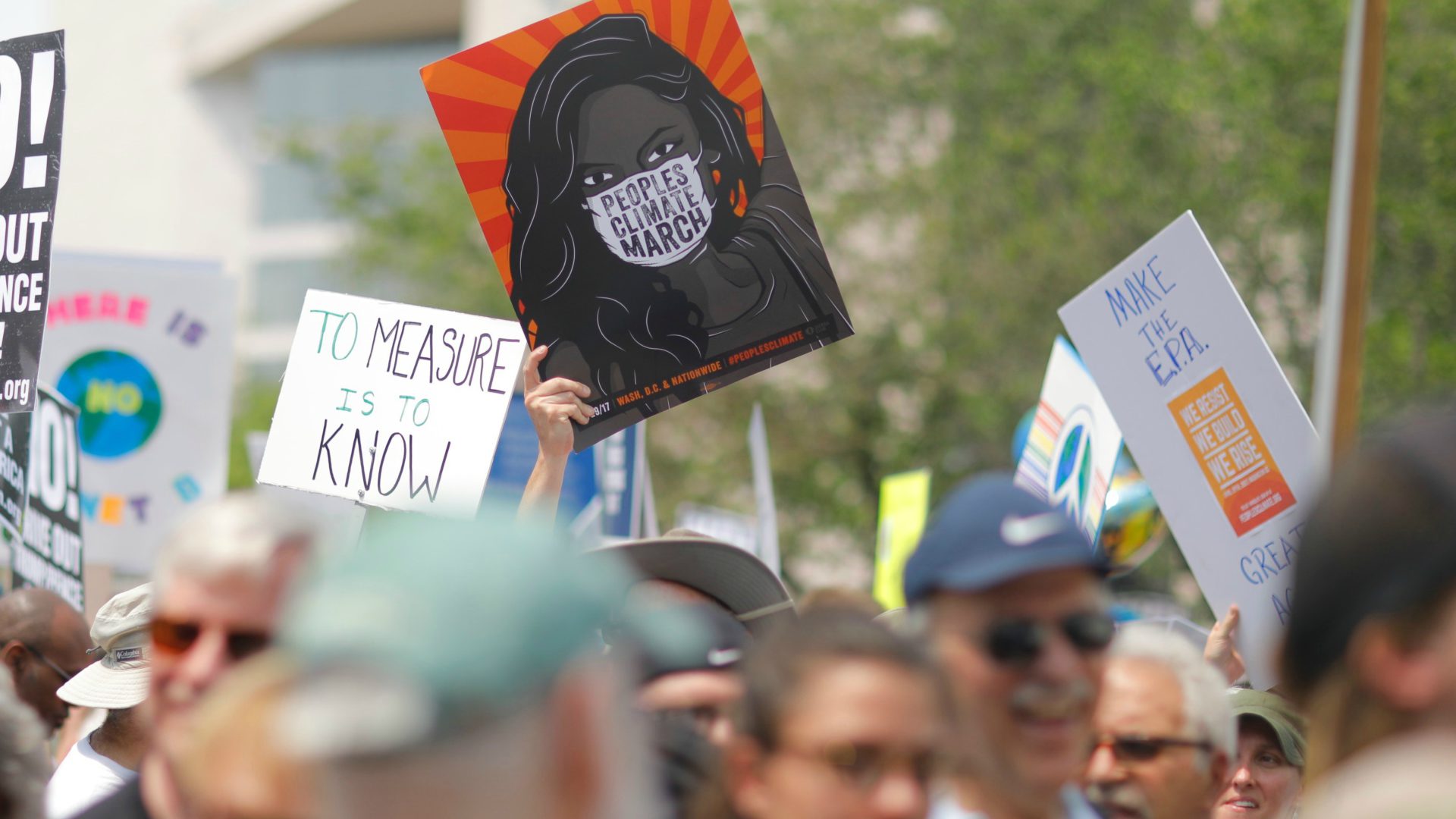 The world is burning – literally. The summer of 2018 saw a global heatwave unprecedented in normal times. Wildfires raged in the Arctic Circle, while a fire at a Greek seaside resort killed 94 people. Extreme heat claimed lives as far apart as Japan, Canada and the UK. 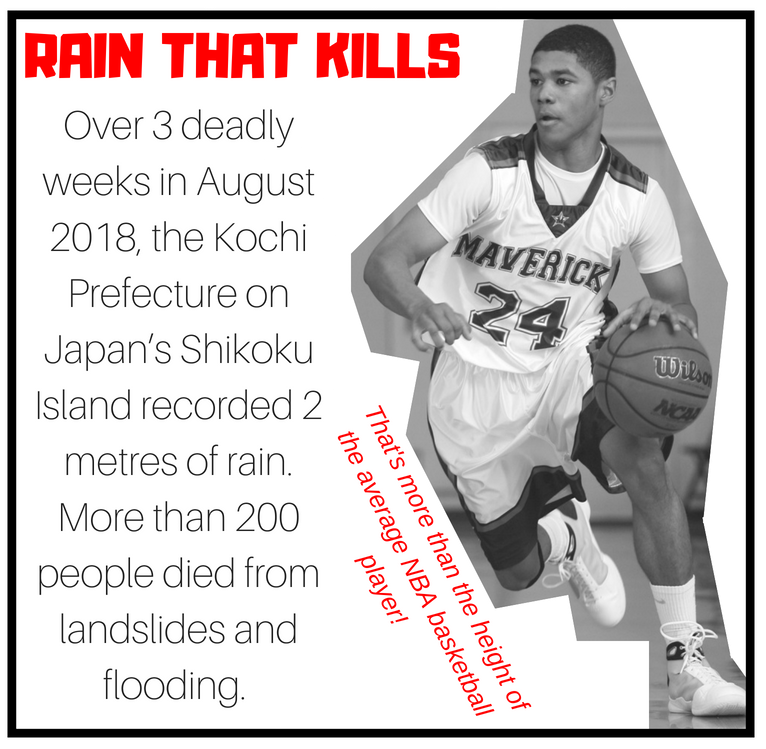 At the same time, floods from extreme rainfall left a million people in makeshift camps in Kerala, India and killed hundreds more in Japan.

Scientists are clear: this is exactly what we would expect to see as climate change becomes a reality. Extreme weather of all kinds, along with the deaths, disruption and destruction that come with it, is set to become the new normal. It’s more urgent than ever that we act to limit temperature rises, and to protect people and ecosystems from their worst impacts.

Our financial markets and economies plough money into fossil fuels, industries that are detrimental to the environment and practices that make reversing climate change difficult.

In 2015, fires set to clear land for palm-oil expansion in Indonesia and Malaysia released more greenhouse gases in a few months than the whole of Japan did in a year. The shareholders of the company responsible are some of the world’s biggest fund managers, including BlackRock, and pension funds such as the UK-based Prudential and Dutch APG.

In 2013, UK Prime Minister David Cameron promised to “get rid of all the green crap” in order to ease the public’s cost of living, while in Greece, a new “dash for oil and gas” was a quick fix to achieve economic recovery.

It’s pretty obvious that financial institutions fund a host of activities that influence the climate, and our economic policies encourage short-term economic growth at the expense of long-term impact. This spells trouble. 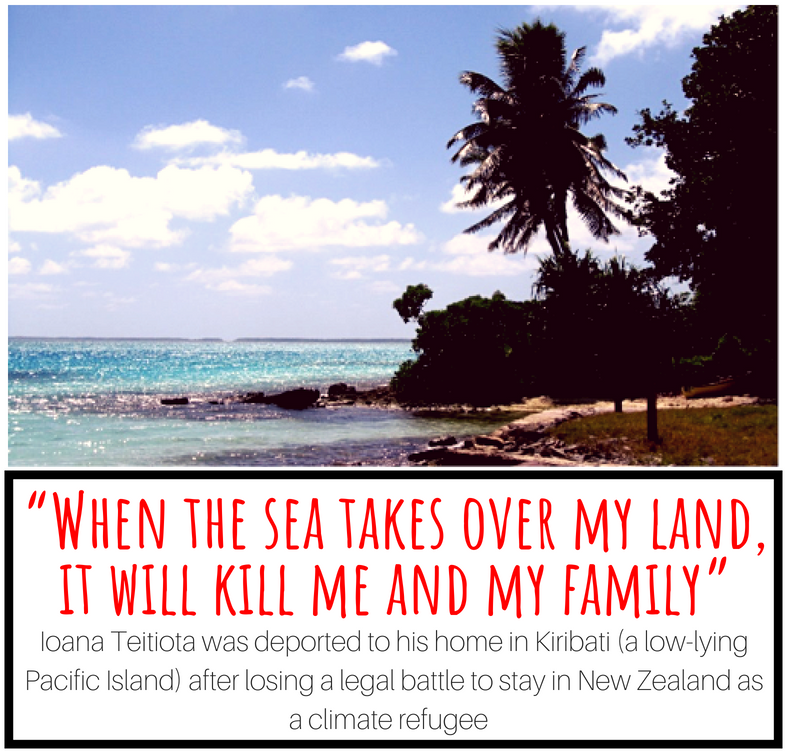 Climate change poses an existential threat to human life as we know it.

The impact of rising temperatures isn’t limited to fires, floods and other visible extreme weather events. It threatens our food supplies (global grain yields have already declined by 10% as a result of heat-waves and floods) and our homes (climate refugees could number 200m by 2050).

The Paris Agreement acknowledges that we need to try and limit warming to 1.5 degrees to avoid the worst effects. This would mean we would have to fight against our profiteering instinct and leave two-thirds of proven reserves of fossil fuels underground.

Our window of opportunity to do this is rapidly closing. But if there are strong policies and actions to transform our economies, this course-correction may still be possible. 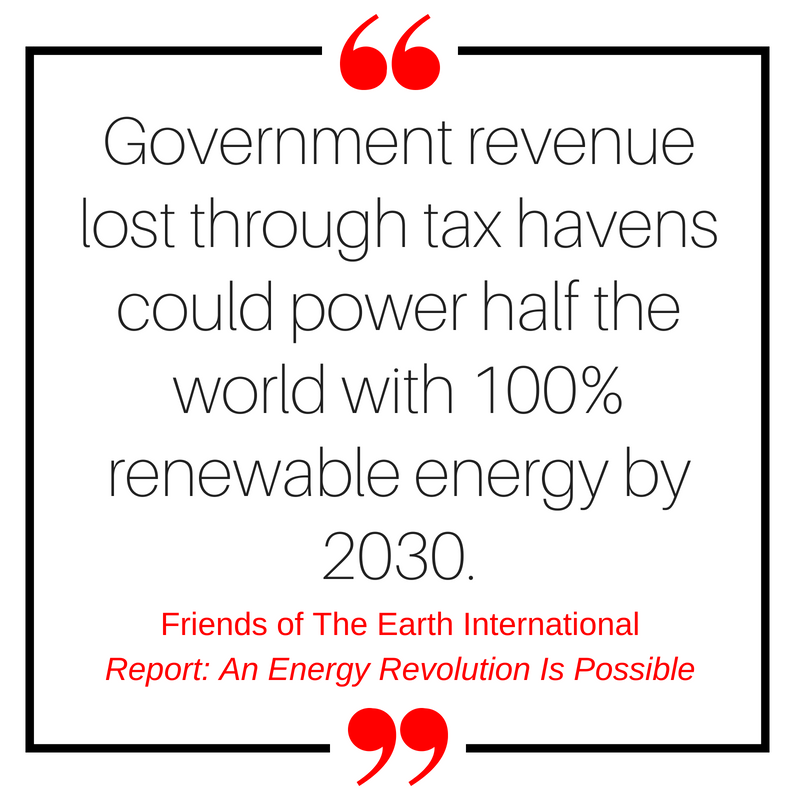 Private finance has huge power to shape the economy. Banks create money when they make loans, so their lending decisions determine where money flows and where it doesn’t. Institutional investors – the pension funds and asset managers who look after our savings – channel trillions of dollars and control the world’s biggest companies through the exercise of shareholder rights. Under our current system, these global players have the power to make or break the low-carbon transition.

It is in everyone’s long-term interests to address climate change but the logic of maximising short-term shareholder value – which drives both corporate investors and most of the world’s biggest banks – pushes in the opposite direction.

A recent global study found that between 2009 and 2014, the 25 biggest commercial banks channelled $931bn into fossil fuels through loans and underwriting. Much to our horror, fossil fuel  investments are continually growing.

Compare this to the amount channelled into renewables – $98bn. That’s 10 times less. These investments may have grown over the years, but it’s nowhere near enough to close the gap. 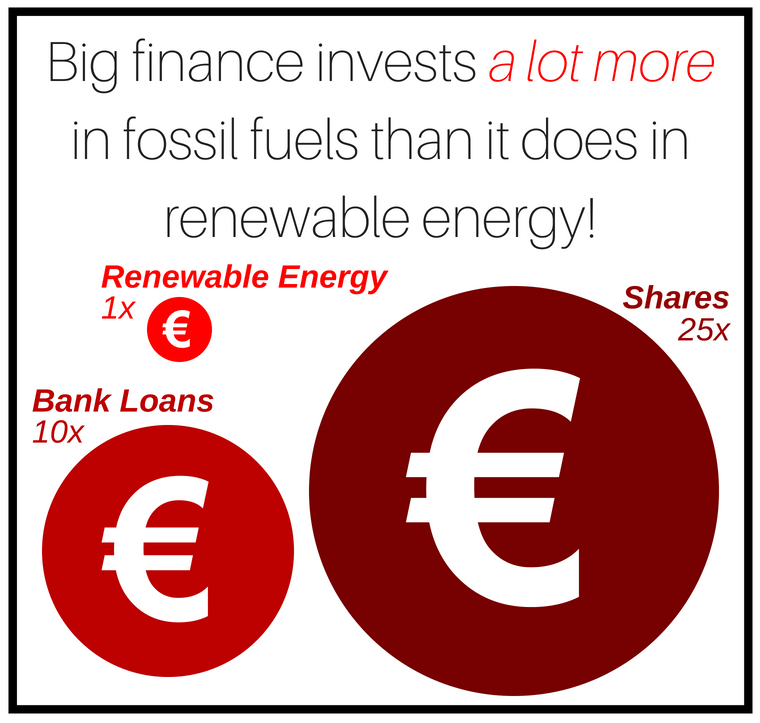 The picture for shareholdings is gloomier still: the top 25 financial institutions invested an average $103bn a year into dirty businesses, and just $4bn in clean technologies – a 25-fold difference.

The problem is systemic. Investors are betting that governments will let things continue as is.

Our broken finance system has not only failed to play its own part in tackling the climate crisis, it has also undermined governments’ abilities to do so. The cost of the financial crisis has squeezed public budgets: governments are less willing to invest in a green future as they struggle to maintain vital public services today.

Even if governments do step in, many of the assets our banks, insurers and pension funds rely on could rapidly become worthless?

Because the vast majority of the world’s remaining fossil fuel reserves cannot be burned if climate change is to be kept within 2C, the value of any financial assets backed by these fossil reserves is at risk.

As the inevitable transition to a low-carbon economy slowly happens, there is a high possibility that the value of such “stranded” assets in people’s investment funds and pensions will diminish or become zero, affecting millions of people’s retirement plans.

Investment industry leaders have brushed off this “fossil bubble” saying that they’d sell out of unsustainable stocks when the time comes. But just as in the case of the 2007 U.S. housing crisis, when there were more sellers and fewer buyers for these financial products, the public is always the one that pays.

What can financial markets do to change this?

Finance needs to go from being part of the problem to part of the solution, and for this it must mobilise resources on a massive scale – similar to mobilising for war.

It’s estimated that just the energy sector will need an investment of $1trn a year, every year, until 2050 to reach a 2 degree future. That’s on top of investments in agriculture, forestry, water and waste, as well as adapting to impacts of climate change that are already ‘locked in’. As we phase out fossil fuels, we will also need to invest in training and welfare to ensure a just transition for workers in carbon-dependent industries.

The governments need to step in: 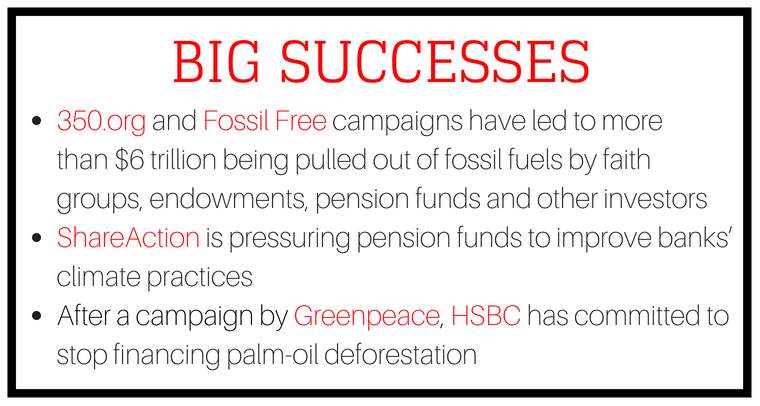 It’s time to act. Climate change is no longer a distant prospect that might affect our grandchildren. It is here today, it affects us all but it hits the poorest hardest. Those of us living in the global north, which has done the most to cause the crisis, have even more of a responsibility to help solve it.

We are all implicated in the financial system to some extent – through our bank accounts, our pensions, our insurance products, and as citizens with a stake in public institutions that hold investments, like universities and local governments. This gives us the power to demand change.

When citizens come together to challenge the world’s financial giants, we can achieve amazing things.

Financial institutions have catalysed climate change, now it's time they feel the heat. Join the battle.

2017, SOMO, Myriam Vander Stichele, The underbelly of the financial world

2016, Friends of the Earth International, An energy revolution is possible: tax haven and financing climate change